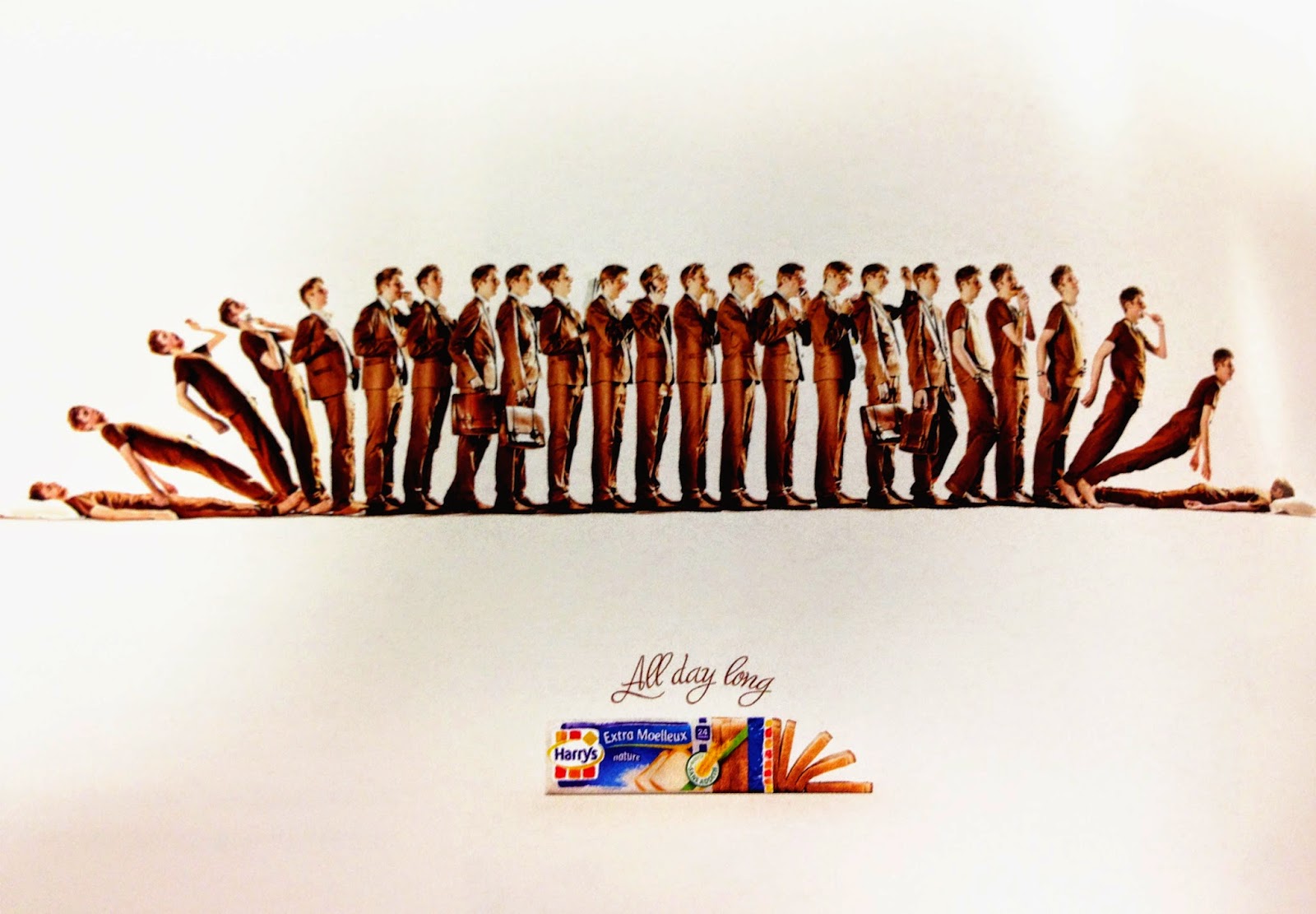 I think this ad is very creative from all aspects of design. Arranging those people in this manner represents a person's full day life. Meanwhile, the arrangement is very similar to the product. I found this idea very intriguing. The image also matches the slogan "All Day Long" of the product. It gave me a feeling that the bread is so good that you can eat it all day long or it's already part of life that cannot be short of.

Posted by Unknown at 2:09 PM No comments: 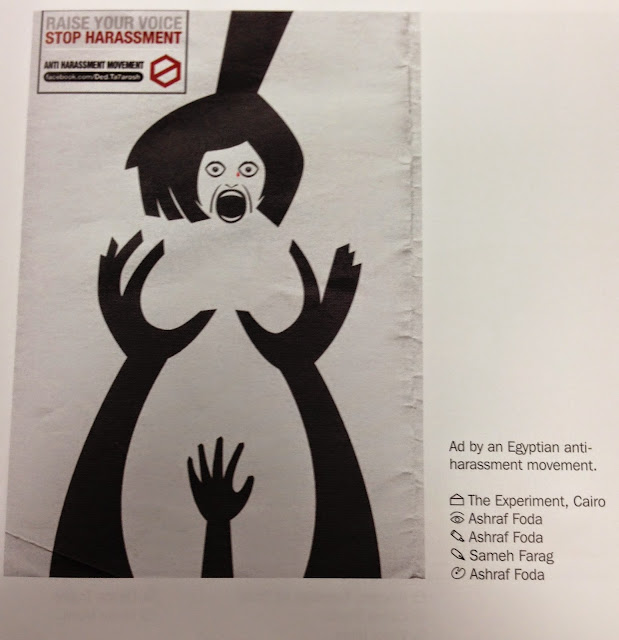 This was from Luerzer's 3rd volume in 2014.  It was created by an Egyptian anti-harassment movement. The designers' names were on the right side of the image.

I found this poster design very interesting. It was a great idea to position the woman's head with the shape of the hand. It provided a very powerful image since harassment always came from hands. Also, the illustration of the woman's expression was simply while effectively delivered the message. I enjoy it a lot.
Posted by Unknown at 9:12 PM No comments: 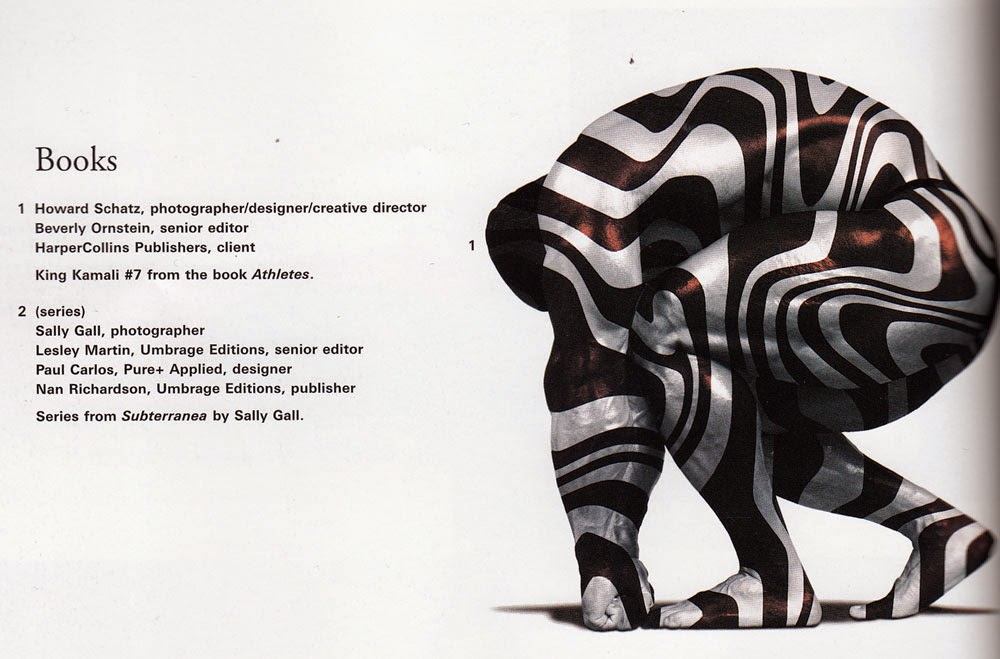 I found the picture from Communication Arts Photography Annual 44. It was from a book called "Athletes."The designer information is on the left side of the image.

I enjoyed the pattern of the image very much as well as the posture of the person in the image. I think it perfectly matched the book name. Also, the fabric he wears gave me kind of metallic feelings which could indicate strong and muscular.

Posted by Unknown at 4:14 PM No comments: 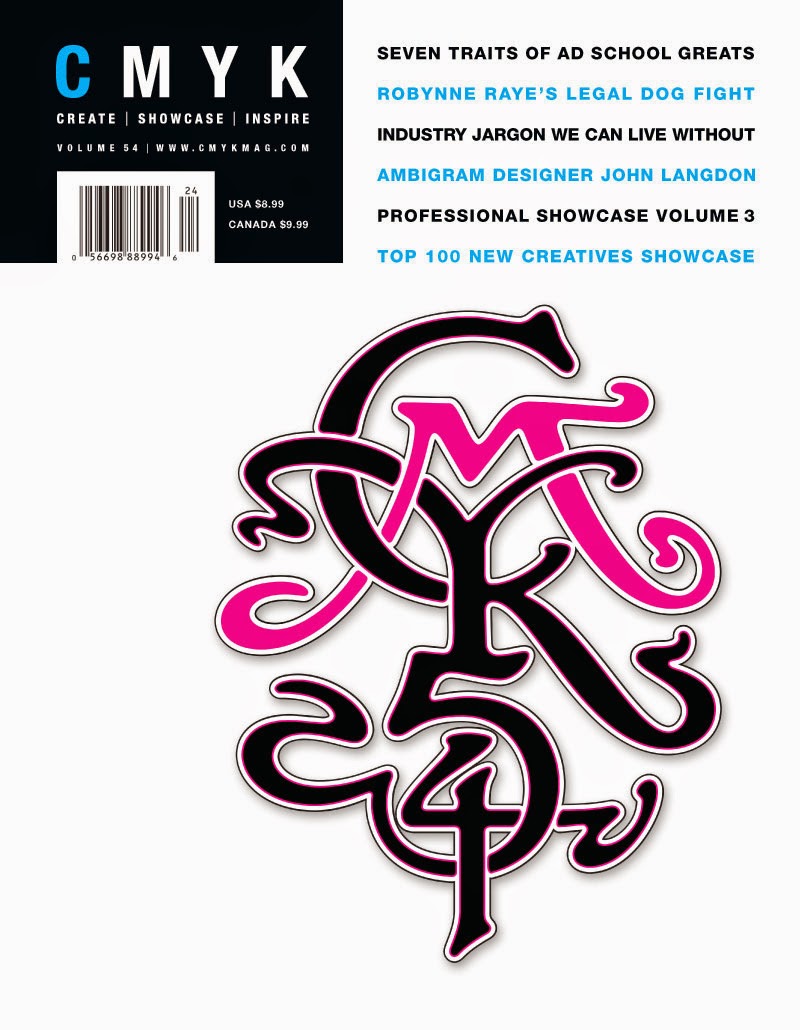 This is From the 54th issue of CMYK. It's the cover of the magazine created by John Langdon.

I personally enjoyed the contrast of the simple layout and the complex logo. And all the colors chosen work very well together. It is also very smart to put CMYK and the issue number together. In a word, It was amazing to feel modern and classic at the same time.

Posted by Unknown at 8:47 PM No comments: 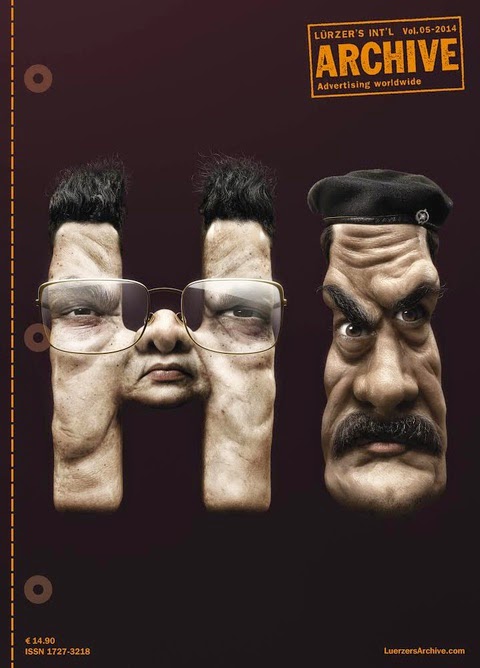 This image was from Lurzer's Archive's volume 5 in 2014. It was designed by Agencia Africa, Sao Paulo Agency. This issue was featuring Brazilian designs.

I personally found this image interesting because It was really new to me. I never saw anything like this before. Twisting men's facial features could have striking feelings. This was the cover of the volume. Like the editor described " Apart from the fact that it is a striking image, there is another very good reason for making an image from Brazil our cover: never before in the history of the magazine has Brazilian creativity dominated a single issue as much as it does this time around."

I believe every single culture has their own taste of design or art, and there is no answer to which one is better. We have to admire the essence of each one.
Posted by Unknown at 11:39 AM No comments:

The beauty of Sharpness (knife ad) 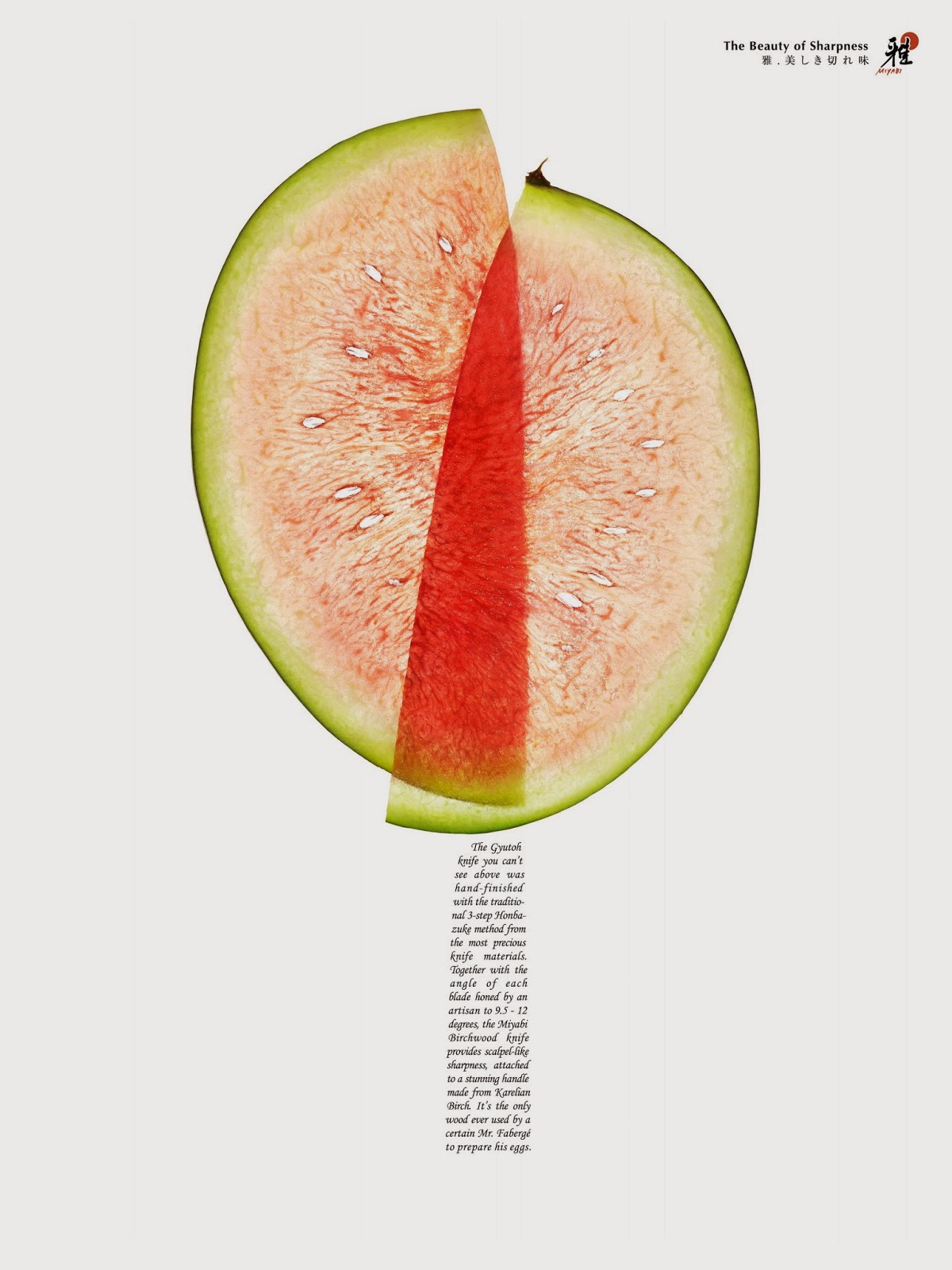 This is an advertisement designed for artisan knife from Miyabi. I personally love this print a lot. First of all, the photographer did a very good job to capture and compose the image. Using the intersection of two piece of melons to form the shape of knife is really genius. And the melons are really crisp and it made you think of what kind of knife cut them. Also, the designer did a good job to arrange the text below to form the handle of the knife. In a word, it was really a inspirational design, simple but effective. I enjoy it a lot.
Posted by Unknown at 7:52 PM No comments: 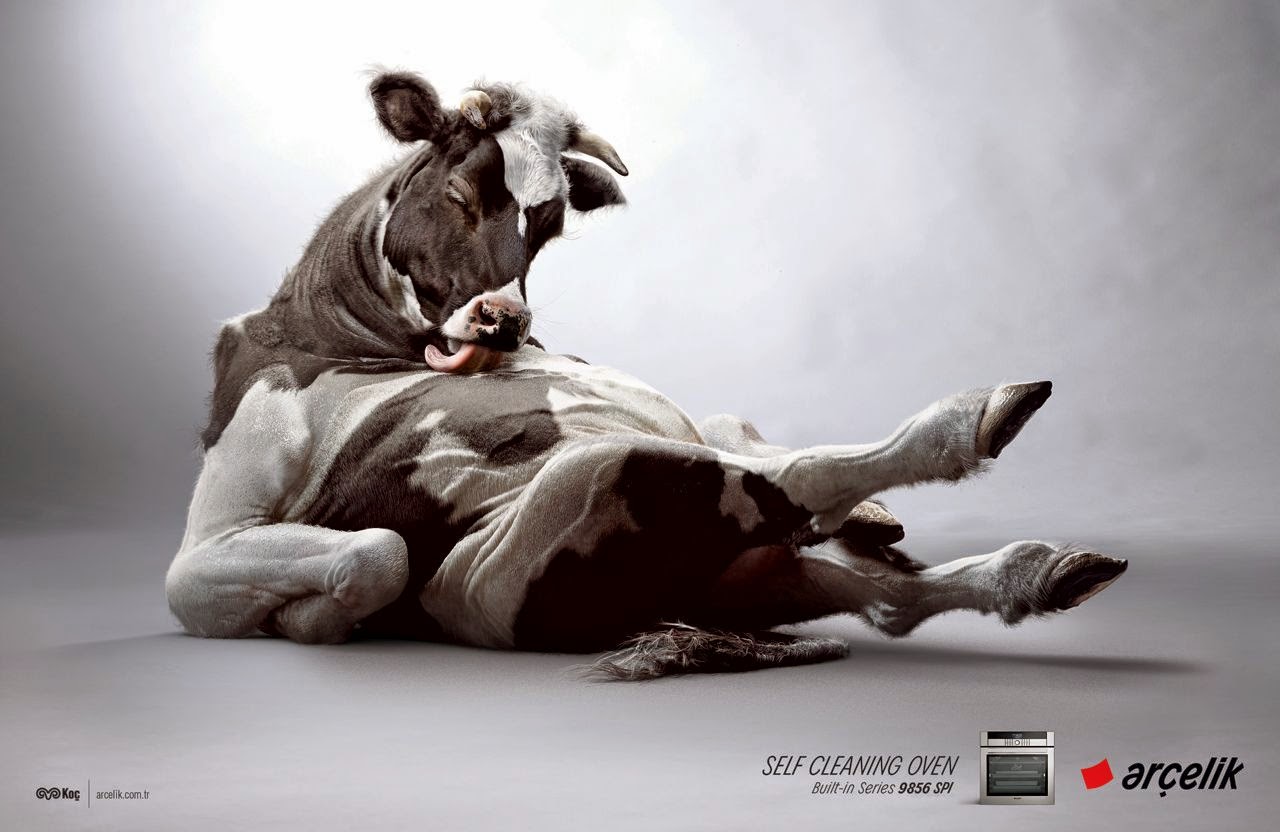 This was published on Lurzer's Archive's 38th ad of the week, 2014. It was designed for "self-cleaning oven" by the Arçelik home appliances brand. It came from Young & Rubicam, Istanbul with visuals created by Romanian digital imaging wizards, Carioca Studio.

I personally enjoyed the design because the visual content was humorous. Although, I felt the cow had nothing to do with the oven, watching a cow licking himself like a cat still brilliantly caught the concept of "self-cleaning." In this sense, I believe it was a successful advertisement.
Posted by Unknown at 6:31 PM No comments: